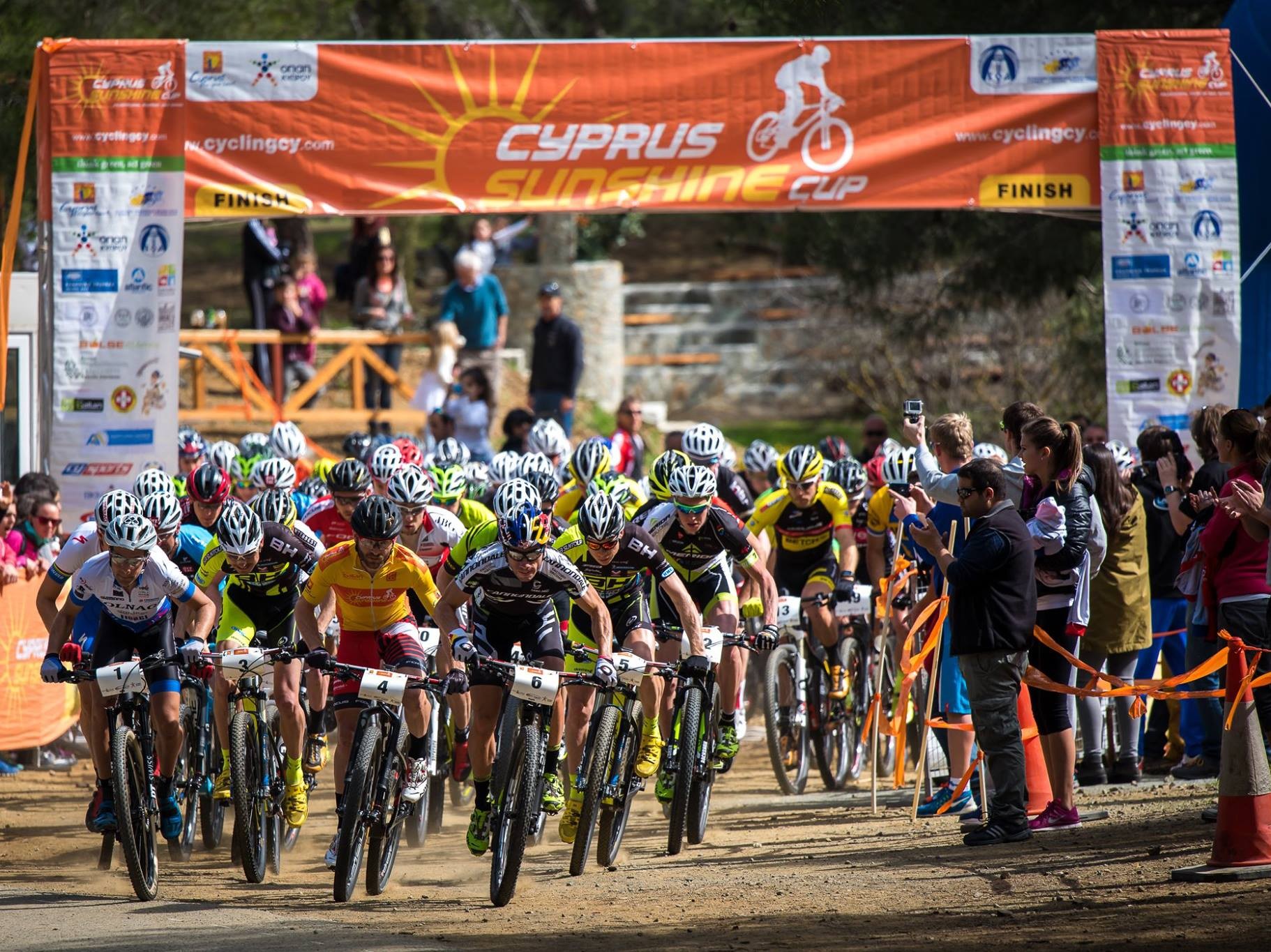 Just after the Cyprus Sunshine Cup we asked the riders few questions about the race, their today shape and goals for coming season. Here is what they said:

It’s a good time of the year to do a first race and see how the winter training has been. The Cyprus race is good organized and I like the courses. During races I felt really good this year. But the real shape you gonna need only end of May when the World Cups start. So don’t do too much comparing about shape of different riders yet. It’s too early. The big thing of first part of the season is the fact I’m gonna ride Cape Epic with Gunn-Rita. Later on I am willing to collect few top 10 results in the World Cups.

I like Cyprus because of nice weather, beautiful nature and great trails. This is 4th year in a row that I am racing here. It’s great opportunity to compete with top riders and to test my form after winter preparation. I’m still focused only for xco and my goal for this season its quote for Olympic games.

It is the first time I have visited Cyprus. I have heard great things about the race from friends, so I was excited to take part in it as my first race for 2015. And indeed it was a really enjoyable race with some great views, great stages and fun single track. I was happy with my fitness and it is good to race some of the best mountain bikers in the world. This year I am focussing on Cross Country, but I hope to race ABSA Cape Epic one day in the future. I will be targeting UCI MTB World Cups this year followed by the World Championships in September.

For me it is a good preparation race for the following season. Stages are quite short, XC-like and there are lots of UCI-Points to be collected. During Cyprus Sunshine Cup I could see that my training obviously went well during the winter, but it’s still early in the year, so I don’t mind much about that. Like most of the people I am focusing on cross country with a goal to qualify for Olimpic Games.

There are a few reasons to choose Cyprus. It’s a great format with four days of racing on nice tracks. The competition is on a high level and mostly there is good weather to train and race. It’s important to me to compare with some of the best riders, so I can see on what I still has to work on. My next start is at ABSA Cape Epic, so this was a good preparation. My mid season goals for 2015 are the World cups and European Games in Baku.

I raced on Cyprus for the first time in 2014 and went back home very satisfied. A well organized race, great courses and a fantastic country with great food and very friendly people. I had a good season last year and I started the season very well after starting the season on Cyprus. This year was a very nice experience again and time will show if I will have the same outcome when it come to top results in the beginning of the season again. I need some races to get started and then it is perfect to race against the really top women in our sport. Now I will stay home for a week then I also go for the Absa Cape Epic this year. It will be my first time taking part in this big event and of course the racing on Cyprus is a great preparation for this event. The goals? Top three results in all WC racing is important for me as well as the championship. both the Europeans and the Worlds (Marathon + XCO), so I can look forward to a very busy and exciting season in 2015.

Together with Kornel Osicki we decided for Cyprus Sunshine Cup mostly because of the UCI points. This was also an opportunity for a good training in front of the coming season. The start gave us an opportunity to compare our shape with top cross country riders and to define what should be improved. Myself I am used to long distance, marathon style stages – this was new to me in Cyprus, the stages were not longer then two hours. Talking about ABSA Cape Epic – it is definetly an interesting and very demanding stage race. One day I would like to take part, we might include it in one of the future seasons. Anyhow, today I focus on colecting UCI points for the Olimpic qualifikation and I am looking forward to see if I will be selected to National MTB Team for World Champs.

I’m coming to Cyprus for the good weather conditions and to begin with a nice MTB race. It’s a good time to begin intensities and it is more like a big training not a goal. We find nice single trails, fast rolling sections, hard climbs, technical climbs… that’s good to work in different types of terrain. Such race in the beginning of the season give you the answer where I am. I’m in the lead group (not the last day because of infection), it’s a good news because my shape is actually not on top! This year I’m totally focused on XCO. The Cape Epic is a nice race, but I’m not prepared for that race and I don’t want to compromise my season. Maybe later I will do it, because when you are older you have more endurance, you are well prepared for that. The first goal is the World Cup opening in Nove Mesto and Albstadt. After that I will make a brake before the hard summer with a lot of races!

This year Cyprus is my second race after the Costa Blanca Bike Race one month ago. But I choose Cyprus because this four day stage race is a perfect training in the early season and gives a lot of points for the ranking. Also the stages are not too long and you can compare to other top riders. After a few month without racing it`s always good to compare your shape even if it`s a long time to the first World Cup. My focus is only on Cross Country and my first goal are the two World Cups in Nove Mesto and Albstadt. So there are still three month to go:-)

I wanted to come in Cyprus for the first time. It’s a different choice than the others years to see others things. It’s also a big UCI race to take points. It’s a beautiful stage race with diffrents forms and I like it. The weather is perfect too! I saw that I am in good condition for my first race. I was regular all the days. I am just behind Vogel and Avincini and it’s good for the beginning. I’m going to Limassol next week for the second race in Cyprus. After I come back in France and I concentrate me only on the XCO with French Cup on March, 31th and Montichiari on April, 11th. I want to be on the World Cup podium for 2015 and the important goal is to go in Rio 2016 for the Olympic!

Cyprus Sunshine Cup was for already a second race. It is a good moment to test your shape, especialy after injuries, which I faced recently. This year we choosen Cyprus for the first time. The main advantage of this race are top guns on the start list. It is a great opportunity to compete with riders from top of UCI ranking. Short stages of Cyprus Sunshine Cup were clearly set for the cross country. For JBG2 Team it was a training race as we focus on the marathons this year. Nevertheless you need the diveristy, not only in the sport. And the main target for the season are the Marathon Champs – European and Worlds.

The main reason why I am here in Cyprus is the training camp with my team and the preparation for the World Cup season. The races at that time of the year are a good possibility to train at high intensity. The organization of the races here is always really good, the courses are demanding and you get a first impression of your fitness and standing in comparison with all the other good riders. After the long winter break it is always exciting to meet everybody else for the first time of the year. Sure, most of the riders are not in top form yet, but everybody tries to give everything in order to see where he or she is standing. I felt pretty good and I am happy about my overall result of the stage race. My focus definitely is on cross country. I will stay here on Cyprus until mid of march and prepare for the upcoming races since in my home the Kitzbühel Alps there is still too much snow to go biking. My goal is to be among the best 10 riders in the world!

Cyprus is a such nice place and means a lot to me, because was on the Island that I showed up for the first time internationally, back in 2009. Since then many things happened and I’ve struggling with teams I rode for. This year I’m riding for a top team and I choose to come to Cyprus because I feel good on the island and also because I wanted to check how was my level compared to few top riders. It’s also a mental thing. I came from the other side of the globe. I knew my shape it was far from 100% but I’ve improved a lot. It’s just great to show your face and be riding wheel by wheel whit some top guns. Thats quite motivating. I went to Cyprus with good legs, but not really fast. I improved my power and resistance, but I wasn’t on race shape yet. I was expecting a good result because I train a quite high volume and many training sections by week and I do that because now I’m able to recover faster. Releases the pressure when you like to your side and you see a top rider on the limit. It’s a good feeling. I’m still far from the top riders, but litle by litle I’m closing the gap.

I have another SHC race in Brazil, with 3 stages and then I go straight to Colombia for some high altitude training followed by Continental Championship. Then a US Cup and a break to build up for the World Cups. It’s the first time I’m focused on racing at World Cups and I’m excited for that. All that I do or plan is thinking on Rio 2016. So my goal is to improve my results on the top races. That’s the goal… Results are just a consequence to me at this point. I’m doing fine at the moment and I still have to improve a lot. I hope you see me around the top riders more and more often and I’m really working hard to make that come true!